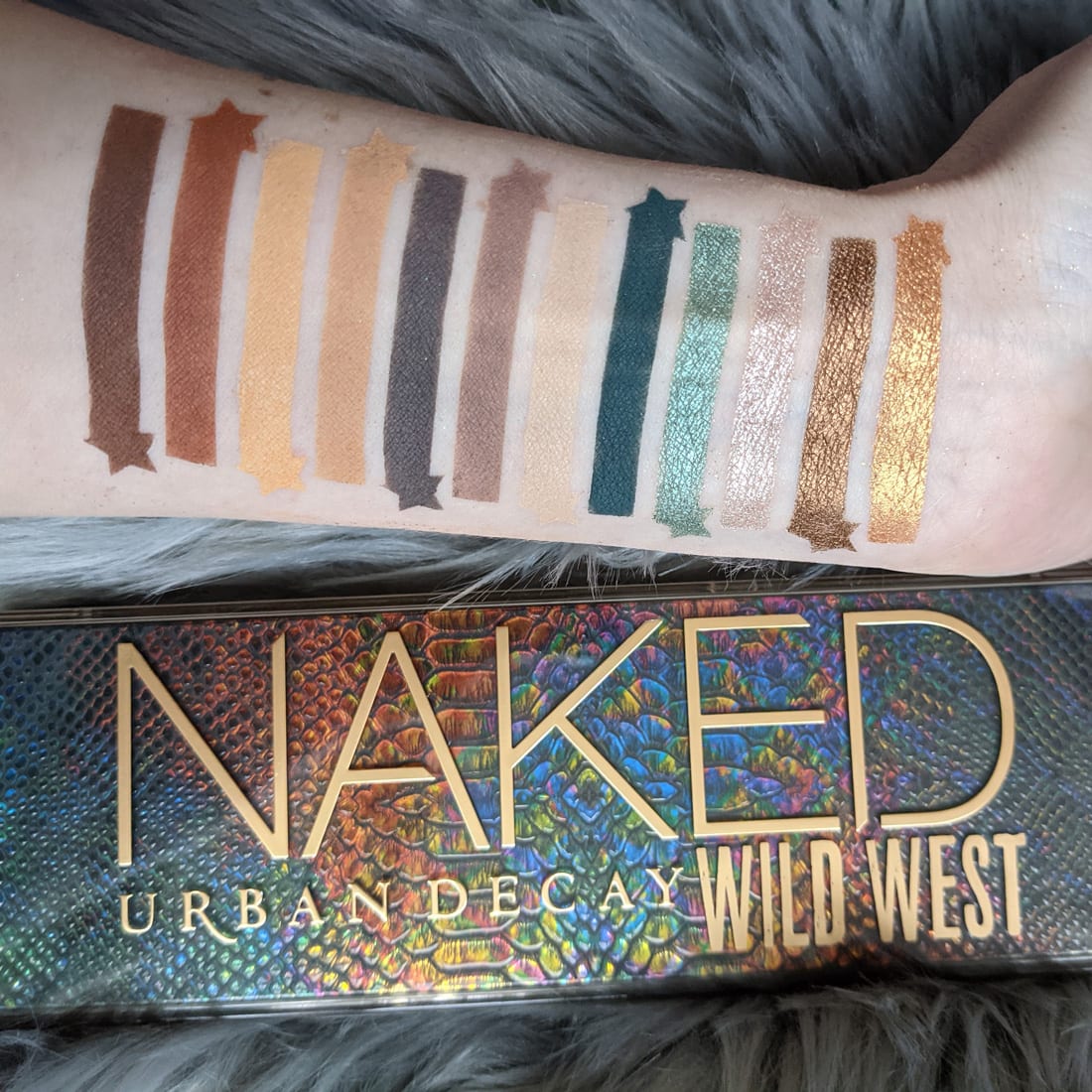 Hello beautiful creatures! I wanted to share my swatches and thoughts on the new Urban Decay Naked Wild West palette with you. UD says this palette is inspired by the California deserts, Joshua trees, and endless skies. Wild West is the first all vegan eyeshadow palette from Urban Decay  (I clearly forgot Stoned Vibes was vegan too!). It has 12 desert-inspired neutrals with a pop of turquoise.

Urban Decay is a 100% cruelty-free beauty brand. Their parent company is L’Oreal, and they are a part of the child-free mica initiative. Thank you so much to Urban Decay for sending me this palette as a PR sample.

I’m personally of the opinion that the myth of the Old West and the cowboy has been very damaging. It is disturbing because of how it tries to culturally erase the Native Americans who lived here before the Old West was ‘discovered’. It minimizes the harm that was done.

The Urban Decay Naked Wild West palette has fabulous packaging. I love the cool snakeskin print design. It’s a mix of cool and warm tones. You get a bunch of staple neutral hues and a pop of turquoise in the mix. The colors I like the best are Hold ‘Em, Cowboy Rick, Bud, Tex, Standoff, Laredo, and Pony Up.

I found the eyeshadow formula to be thinner to work with than my UD eyeshadow singles, which is unfortunate. I love the Urban Decay eyeshadow single formula, but I don’t feel like the eyeshadows in this palette are the same quality. They’re more difficult to work with. Are they unworkable? No, but I feel like I have to spend extra time building up these shades and then blending them out. I’d rather reach for shades that don’t require so much extra work.

Who is this palette for? The Urban Decay Naked Wild West palette is for those individuals who are new to makeup and looking for a palette filled with neutrals and a pop of turquoise. If you are someone who loves bright eyeshadows, skip this one. If you’re a UD collector, you’ll want this one for the packaging.

I love Urban Decay and have adored their products for more than a decade. The Naked train has been ridden into the ground. As many people elsewhere around the internet have mused, Urban Decay could stand to revamp their line. They need to figure out what is up with their palette eyeshadow formula and improve it.

I would love to see more smaller, tightly curated palettes from Urban Decay. Palettes like the Aphrodisiac, Detour, or Shortcut, where they’re not trying to be everything to everyone, but instead focus on a stand-out color story and formula.

What do you think of the new Urban Decay Naked Wild West palette? Will you be picking it up?

Foundations and Concealers for Fair Skin

Leather Accessories To Complete Your Look

Fire in your belly: the return of men's crop tops

Here’s Why You Shouldn’t Feel Bad For Amy Cooper