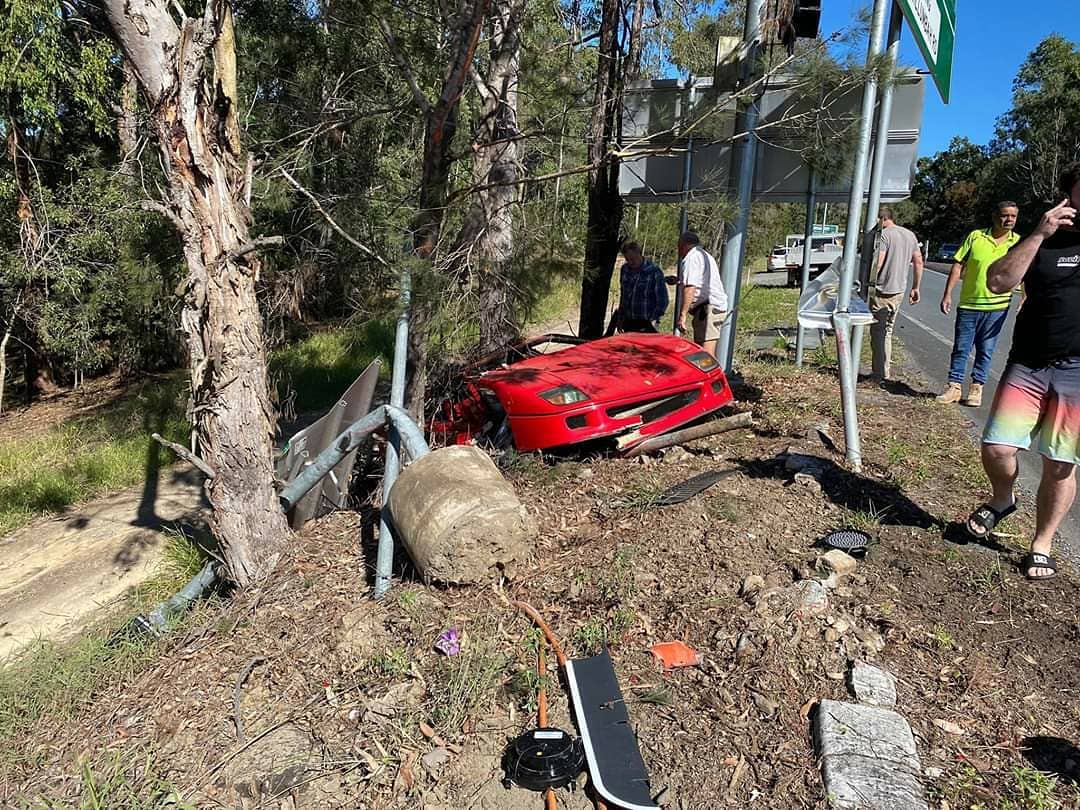 Luckily, not all car crashes are fatal – at least for the owners. Even small crashes are usually enough to consign a car to the scrapheap, and our roads are littered with the rusting corpses of long-departed motors.

The reality is that most modern cars are designed to crumple aggressively when impacted in order to protect both occupants and pedestrians. It does mean that modern cars get written off easier than older models, however.

No matter the model or age of a car, it’s always tragic to see a wrecked one on the side of the road or wrapped around a tree… Particularly if it happens to be a $2.4mil, super-rare Italian sports car.

Some unlucky driver crashed a Ferrari F40 today on the Gold Coast, allegedly having come off a main road in Nerang after speeding (what, a Ferrari owner speeding? Pull the other one.) No news yet as to the driver’s condition. Sheepish, we reckon.

The result is that this F40 is less of a ‘Prancing Horse’ and more of a ‘Limping Filly Ready For The Knackers’.

That’s not all. Unlike your run-of-the-mill daily driver, a car this rare would normally be restored, no matter the cost. The cost might be through the roof though, as many commenters speculated.

“Supposedly no insurance as it was on dealer trade plates and not road registerable due to ADRs”, one observed.

The Australian Design Rules (ADRs) are national standards for vehicle safety, anti-theft and emissions. The ADRs are generally performance based and cover issues such as occupant protection, structures, lighting, noise, engine exhaust emissions, braking and a range of miscellaneous items, according to the Department of Infrastructure, Transport, Regional Development and Communications.

Many older cars – especially rare imports like this F40 likely is – don’t pass the current ADRs and so face restrictions on their registration and use. ADR compliance is unlikely to affect the desirability of iconic exotics like the F40.

First produced in 1987, the Ferrari F40 is a mid-engine, rear-wheel drive berlinetta that was designed to celebrate Ferrari’s 40th anniversary. It’s also known as the last Ferrari personally approved by “il Grande Vecchio” – Enzo Ferrari, the founder of the marque. Its twin-turbocharged 2.9L V8 puts out a still-impressive 352kW (471 hp) and is widely regarded as one of the most iconic sports cars ever made.

Only around 1,300 F40s were ever made, and less than half of those remain on the roads today. If this Gold Coast one can’t be recovered, it would truly be a loss.

Fingers crossed it was just a replica. It’s pretty common for cheaper cars like the similarly mid-engined Toyota MR2 to receive cosmetic modifications in order to mimic the far more expensive and exclusive Ferrari.

10 Cologne Hacks for Men – How to Make Fragrances Last Longer

An Insight Into The Hot New Streetwear Brand – Yung Venture

5 Staple Pieces You Need To Actually Dress Like A French...

Editor - October 21, 2020 0
Topshop’s most iconic collection is back with an all-new capsule for Autumn Winter 2020. Expect IDOL’s signature slick and timeless aesthetic, updated in...