Home Fashion The Best Trends Of The ‘90s Are Brought Back To Life In... 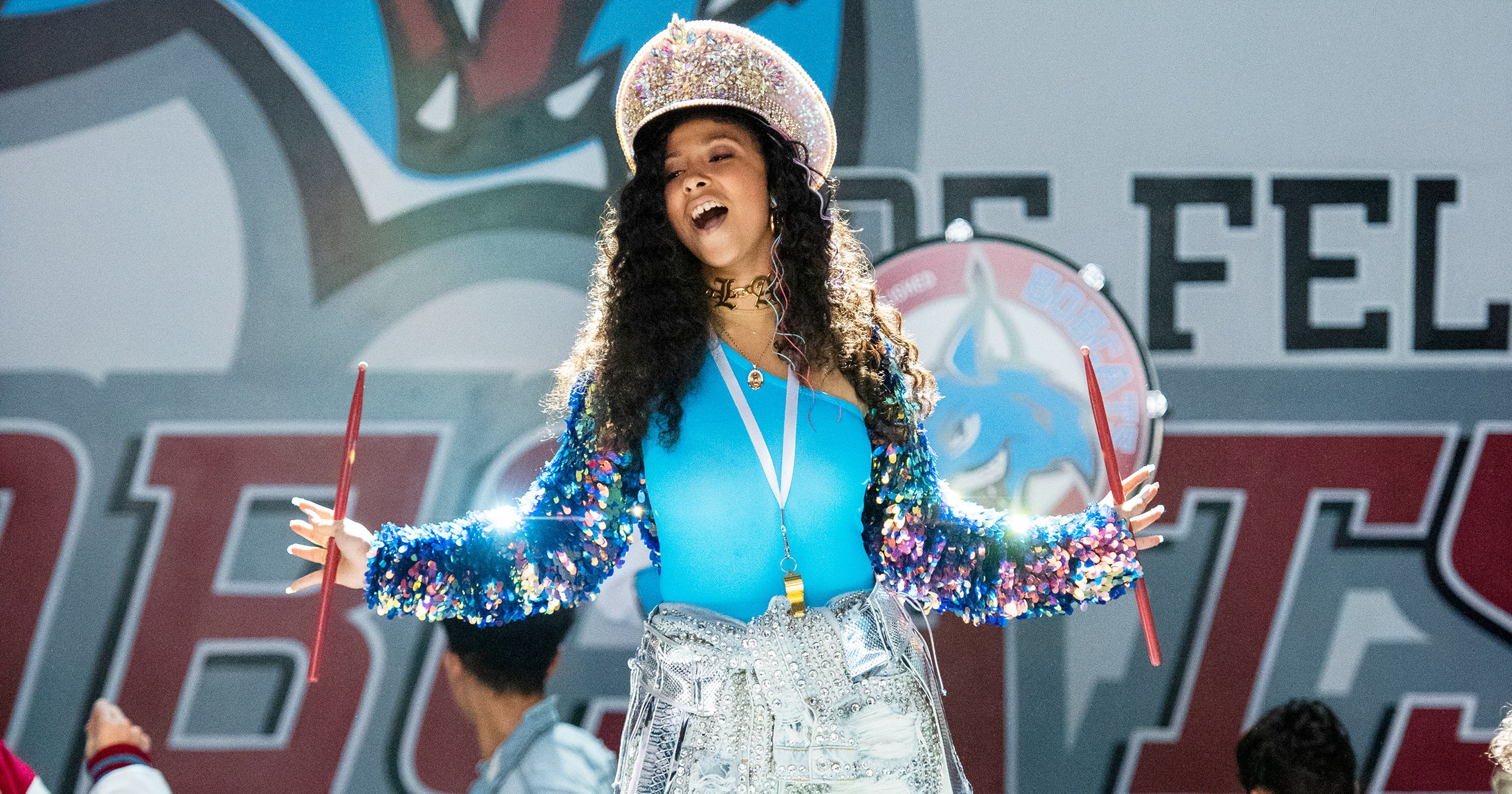 There’s little costume designer Soyon An wouldn’t do to achieve the perfect look. For her most recent project, Netflix musical series Julie and the Phantoms, An, whose resume includes American Idol, Step Up All In, and So You Think You Can Dance, even picked up scissors more than a few times for some creative tailoring — cutting decorative elements out of boots to place on a blouse, and turning a dress that didn’t fit into a jacket. “I feel like this whole interview is turning into a ‘Soyon deconstructing stuff,’” she tells me midway through our talk, laughing. But all the detail-oriented work paid off: Julie and the Phantoms costumes not only stand out, but they’re also full of hidden meanings that go beyond what you’d see in most costume work.

Madison Reyes plays Julie, a high schooler who loses her love for singing after her mother dies. Then, things get weird: The ghosts of three young musicians who died in the ‘90s (played by Charlie Gillespie, Jeremy Shada, and Owen Joyner) appear in her mom’s old music studio. And then things get weirder: The ghosts convince Julie — the only living person who can see them, no big deal — to start a band with them so that people can hear their music despite them being, well, ghosts.

As you can imagine, all of this has a big effect on Julie — and it’s reflected in what she wears. As she goes from being unable to perform in even a classroom setting to singing on the stage of the biggest music venue around, her wardrobe evolves from a sweater featuring a smiley face, jeans with sun-patches, and oversized slippers to crystal-adorned jackets and tulle skirts. “Julie is in mourning for her mother, so I wanted to be able to tell a story through costume, where, in the beginning, she is kind of hiding under a hat and under the hood and wearing more of an oversize fit, and then eventually she starts to walk into her own,” says An. “She is a sneakerhead, and she’s a little tomboyish. You can tell she doesn’t put much thought into her style, but it always looks cool.”

An pulled a covetable selection of sneakers, and even bid on a pair of limited-edition Air Force 1s, to feature in the series. “I wanted to get her kind of exclusive sneakers and really live up to the character being a sneakerhead. So I went on StockX, and I bid on the cheetah-print sneakers,” she says. “Because they are limited-edition and Madison had a body-double, we then had to paint another pair of Air Force 1s to match the original for her body-double.” She added special touches to other pairs, too: “Her Filas, I custom painted those sneakers, so it looked like something her character did herself. She is one to doodle on her pants and draw on her sneakers.”

For her clothing, An says that 50 percent was custom-made, while the other 50 was pulled from brands like Kate Spade, Urban Outfitters, Forever21, and I.Am.Gia and vintage stores. For one of her first performances with the band, Julie wears a camo jumpsuit, which An got in a vintage store in Highland Park in Los Angeles, serving as a nod to Reyes’ mom: “We discussed how wonderful it would be to pay homage to her mom, who’s serving our country.” An then customized the jumpsuit with patches she found at an unlikely place: the UGG store in Vancouver, where the series was shot. “It was hilarious. On the display, they had the patches on the UGG boots. For a split second, I was going to buy a pair [of boots] and cut all the patches off to use on the costume, and then [the salesperson] was like, ‘No, you have to buy them individually and then accessorize your boots,’” An says. “I was ready to cut them out for the series!”

This wasn’t the only scene for which An was willing to deconstruct some shoes. During one of Julie’s big public performances, she wears a white shirt adorned with colorful butterflies. “I loved the translucent butterflies on these clear plastic boots that I found on Dolls Kill, and I cut the butterflies off the boots and put them on her top.” Butterflies, a common theme with Julie’s clothing, are symbolic of her evolution as a musician. “A butterfly goes through a stage of metamorphosis, from caterpillar [to] cocoon to flying-free butterfly, and I think her character represents that,” she says. “There she is as a caterpillar before the series even starts, then she is a cocoon because her mother passes away, and, once she meets the phantoms and she finds her voice and music again, she is flying free.” Nowhere is that more evident than in a scene in which Julie performs wearing a crystal hat and sparkly pants featuring over 5,0000 Swarovski crystals (see top photo). “Those crystals were punched in, the grommets with the prongs. I think the pants weighed more than Madison,” says An. “She was like, ‘This is the heaviest pair of pants that I have ever seen in my life!’”

For another performance look, a turquoise dress with a fringe vest, An also applied her custom touch. “That turquoise dress was hand-painted. I think that dress was a black Armani Exchange dress, and I painted over it to give it that grunge, punk, rock and roll look.” As for the vest? I won’t spoil it, but it shows up first in episode 1: “There’s like, an Easter egg that I hid in there.”

For the final performance of the series, Julie wears a custom-made purple dress with a beaded leather jacket, made from a dress that An deconstructed and transformed. “The original idea was that she would have something fabulous from her mom’s closet, so I was looking at some vintage stores. On TheRealReal, I found this Balmain dress,” she says. While fitting Reyes, An realized that it was too big. “I couldn’t let go of the dress. I loved it so much that I took the outer layer of the dress and I used it as fabric and I made it into that leather jacket,” she says.

But Julie isn’t the only one with an enviable wardrobe. Her best friend, Flynn (Jadah Marie), dons some of the most memorable looks of the season. “From the moment I read the script and could hear Flynn’s voice, I was like, ‘She is a fashionista, the cool kid on campus,’” says An. This resulted in Fenty-like tie-dye shirts, leopard-print everything, and brightly colored dresses and jumpsuits, as well as can’t-miss accessories like a bulldog-shaped purse, heart-shaped glasses, glitter backpack, and earrings spelling “What.” “That’s her personality. It’s like, ‘What?’ Like, ‘I don’t care, it’s cool.’ I wanted to embrace that language in the clothing,” says An.

In contrast to Flynn and Julie is their classmate Carrie (Savannah May), the spoiled daughter of a former rockstar, who makes Julie’s life hell in school, all while wearing a tweed matching set and loafers with bows, a feather boa over a denim top and skirt (with her boyfriend matching in a jean jacket, a la Britney and Justin at the 2001 American Music Awards, no less), and a “Royalty” T-shirt. As the leader of Dirty Candi, a girl group who feels threatened by Julie and the Phantoms’ new success, Carrie goes even more over-the-top with her looks with glitter shorts and high socks. While Dirty Candi’s costumes, with each girl dressed in a specific candy-colored top and wearing a matching wig, appear to draw from K-Pop, according to An, her biggest inspiration was the bright, iridescent hues of Jolly Ranchers. “One of the first looks when you see the Dirty Candi girls, they’re in the vinyl, translucent clear plastic jackets, and that right there is Jolly Ranchers,” she says. “I was like, ‘We have to spell Candi with an “I” [on the back of the jackets] so that the “I” can be a lollypop. That’s their logo!’”

On another stage, viewers can see dancers that could rival the best of Jazz Age and Moulin Rouge at the Hollywood Ghost Club, a speakeasy that sees ghosts and “lifers” mingling, owned by Caleb Covington (Cheyenne Jackson), a ghost-magician who can make ghosts visible to people. While luring Luke (Gillespie), Reggie (Shada), and Alex (Joyner) into the club, Caleb wears a rich purple velvet suit custom-made by British designer Joshua Kane. “[Director] Kenny [Ortega] was like, ‘Think: Houdini — he is a magician. And think of Cary Grant, those old beautiful movie stars, black-and-white films, and how dapper and regal they were,’” says An. To add to the wow factor, An and her team customized the coattails. “The look didn’t get there until four days before we started shooting, so then we had to fit Cheyenne, do all the alterations, then stick about 10,000 Swarovski crystals on that jacket until the morning of when we started shooting,” she says. After running out of the crystals that An brought from L.A, she had to source more from a local bead store. “They didn’t have all the colors, so then I had to implement other colors and recreate the design of the Swarovski pattern so that it was symmetrical.” While Caleb’s look is undoubtedly the centerpiece of the scene, which An calls one of the most challenging of the series, it’s hard not to be mesmerized by the sparkle of the rest with musicians in flapper-like dresses, performers in cabaret-like costumes, and the waitstaff in pink coattails, all inspired by “Old Hollywood — but with a twist.”

As for Luke, Reggie, and Alex, An wanted them to exude ‘90s fashion while also appealing to the modern viewers who are currently enjoying the resurgence of the era’s trends. “I wanted to bring all the timeless ‘90s pieces for the boys so that, looking at it today, you know that it’s ‘90s but still, it’s like, ‘That’s something I would wear today.’” She created a unique ‘90s look for each one, with Luke dressed as the “die-hard rockstar” with cutoff muscle shirts and the tight pants; Reggie, the “timeless rock and roll guy” who wears flannel while simultaneously channeling James Dean with the leather jacket, white T-shirt, and black jeans; and Owen “bring[ing] in some of that ‘90s street in a hoodie-cargo pant look with the cool ‘90s sneakers.”

Indeed, the ‘90s staples of today, like Champion hoodies, tie-dye shirts, and retro-esque Nike sneakers, are all on display, proving just how cyclical fashion is — and how much foresight An had while filming. “I like to think forward,” she says. “I like to do, like, trend forecasting and create fashion trends on projects that I am working on that I foresee happening.”

Newcomer Madison Reyes Is Ready To Do It All

Bachelor Contestants Fall In Love In Two Months—How Realistic Is That?