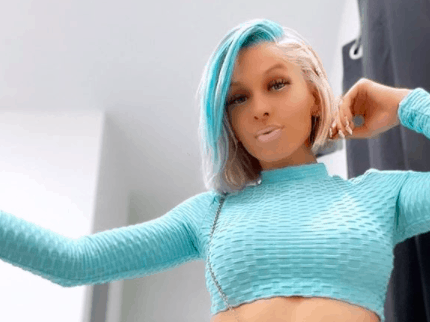 Roommates, Love and Hip Hop New York cast member MariahLynn is accusing her ex boyfriend and his new girlfriend of jumping her and her friend recently! If you remember we just posted her yesterday turning up for her birthday with a huge bandage on her leg.

Well according to TMZ and law enforcement sources, the bandage came from the alleged attack. Apparently, MariahLynn filed a police report last week detailing the alleged attack. She claims her ex boyfriend (who she recently got into it with on social media over the theft of a puppy) allegedly asked her to go to his Bronx apartment to hash out their differences. Unfortunately, that’s where Mariah says things took a vicious turn.

Mariah alleges as soon as she got to his place, her ex boyfriend and his new girlfriend started jumping her and her friend. Sources close to Mariah claim that she was punched in the face, dragged by her hair leaving her bloodied and battered right alongside her friend who accompanied her to his home. Mariah also suffered a fractured leg, multiple contusions and a black eye.

If you remember, MariahLynn got into it with her ex boyfriend over a dog that was gifted to her. We spoke to her exclusively and she spilled a little tea on the situation. If you didn’t get that, click here!

Since the alleged attack, MariahLynn has been seen partying for her birthday and in better spirits.

Black Is King Is Coming—But Not Without Controversy

Editor - October 22, 2020 0
Sharing is caring!*Disclosure* This is a sponsored partnership with SKIMS. All thoughts and feelings are our own.Who is ready to add the coziest...