I think one of the things that made Lockdown easier so far was the weather.  We have had the driest Spring in years and the sun has shone almost every day.  It has meant that the beaches have been packed but it has also meant that getting outdoors, fresh air and vitamin D hasn’t been a challenge and if things get difficult in the house, we have had the garden to come to.  The weather has changed this week, temperatures have dropped and I have seen a shift in mood on my social media that mirrors mine.  I hope that next week we either have adjusted better mentally to the changes or the sun comes back out!

It was the first day back after half term and I felt like we should start out good so we loaded up Reading Eggs on the laptops and they each did about 40 minutes of work.  I then asked Archie to write three sentences and you would think I had asked him to pull out his own teeth the fuss he made.  There was 30 minutes of arguing followed by three minutes of actually doing something! I made the decision today not to send Finn and Cora back to school and nursery on Wednesday, something I have been thinking about for days now and I feel much lighter having finally made my mind up.  It is something we will reassess constantly but for now it isn’t the environment we want to send them back into.  It does mean I feel more pressure to be teaching at home though, so let’s see how today’s good start continues! 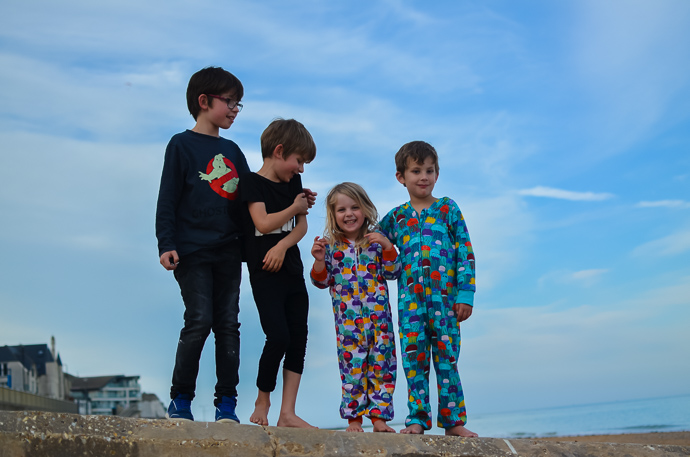 I had lots of little things I needed to do today, prescriptions to collect, food shopping to buy and others which meant the children were mostly left to their own devices whilst Ed attempted to work and supervise them at the same time.  It was nice to get out and away for a little while and it was nice to tick all the things off my to do list which had been building up as it just isn’t easy to do with all four children around.  The day seemed to disappear without us having done anything so after dinner I took the kids down to the beach for a run around.  It was so much quieter than it has been during the days which meant I could give them more freedom to run and explore without being anywhere near anybody.  It was lovely and warm still and I think this is something we need to do more often as it was lovely to run and jump and play together without the stress. 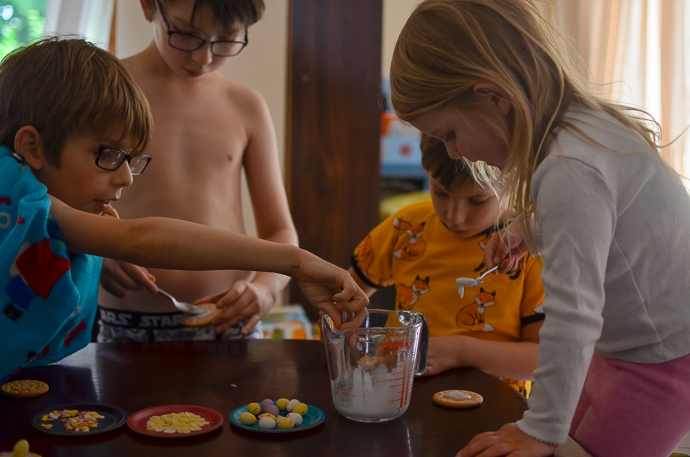 I don’t remember baking much as a child (although I am sure we made fairy cakes at least) but I do remember icing biscuits.  My mum would get out some rich tea biscuits, mix icing sugar with water and give us whatever she had to ice and decorate them.  I remember eating them for pudding on a Sunday evening whilst watching Scrapheap challenge and choosing which ones were for my parents too.  As the lockdown has progressed, our energy for baking has started dying off but they loved this, it was easy to set up and there was very little mess.  We did a little bit of learning work today but as usual we kept it brief and spent much more time playing! 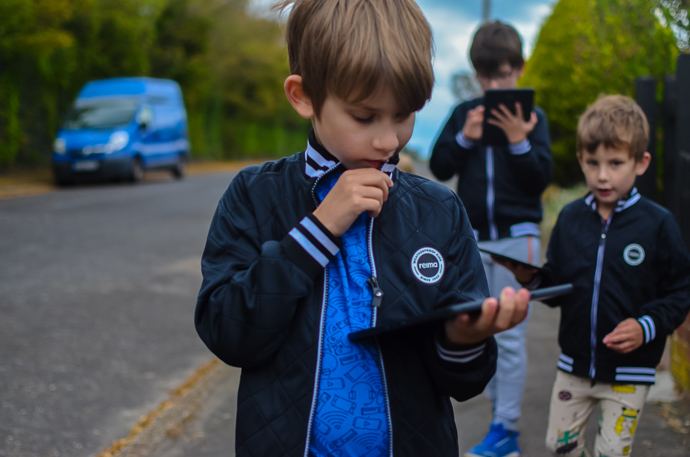 Today we mixed their favourite thing (technology) with mine (being outdoors) and went on a long Pokemon walk.  We met up with my mum who also plays and all three boys walked along with their eyes firmly on the little screens catching and battling.  The weather is so much cooler that we wore jackets and only just made it back before the rain started.  Things are slowly starting to open up in the community and I did decide that we would drive to Mcdonalds for a drive through for dinner.  I wouldn’t even say we were missing it particularly, but the novelty of doing something different and of not having to cook was just so appealing and the children were all really excited for their nuggets, chips and Trolls toy.

There is no photo today.  I couldn’t find the motivation to take one.  The kids didn’t get dressed, we didn’t do anything and there are only so many photos I can take of them watching TV in their pants.  My friend called it ‘Corona Fatigue’ and I am sure it is a real thing.  The monotomy of life can be exhausting, the lack of purpose sometimes can be so tiring and I think it is natural to crash every now and again.  I think these days happen in ‘real life’ too but you still have to get up and do the school runs and so even without anything else, it feels a little bit productive.  Now those necessary journeys that might pick us up are gone and it is a lot easier to sit and dwell on the down days.  I am embracing this slump rather than fighting it and hoping that next week is better.

Swing the 50’s with this creative children’s line

‘The Snowflake’ by Benji Davies

What To Do In A Financial Emergency

ABOUT US
A fashion website curating fashion and lifestyle from the high-end to the budget-friendly. If you're looking for style inspiration then Sometrical best fashion website to follow now.
Contact us: [email protected]
FOLLOW US
© Copyright 2020 SOMETRICAL - All Rights Reserved | Developed by iTHawks
MORE STORIES
Celebrity Style