Home Summer Fashion Erin Moriarty on Season Two of The Boys and Being a NYC-L.A.... 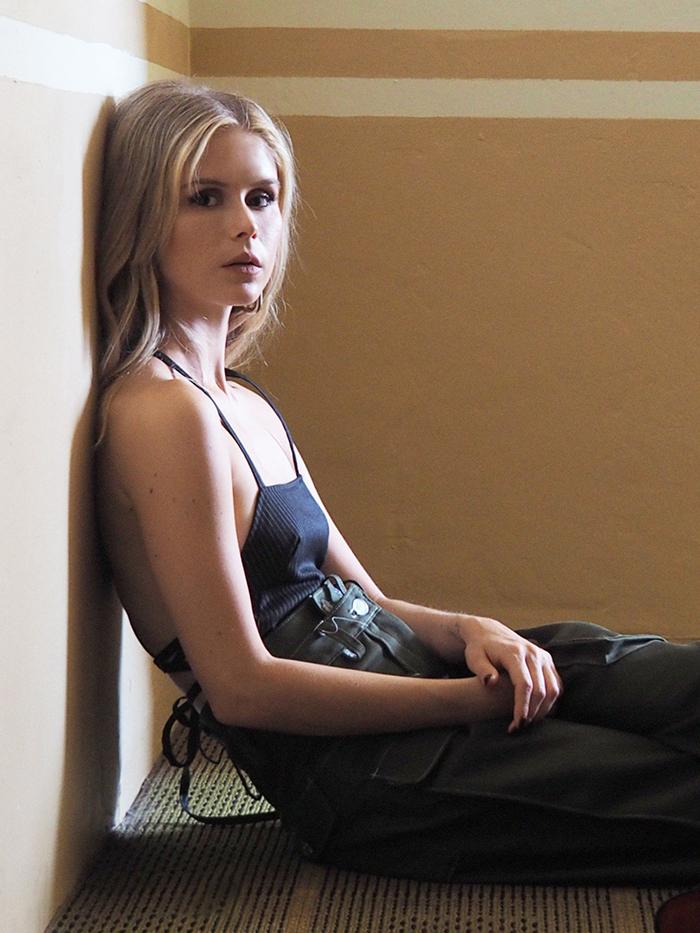 What I love about season two is that, despite the name of the show, it’s really about the girls. A new member of The Seven, Stormfront, challenges a lot of the stereotypical female-superhero tropes, which is something Starlight really admires. It’s great that, with this show and films like Wonder Woman and Captain Marvel, we’re seeing more narratives with women at the forefront and owning their strength. How do you think the industry can be improved even further?

I think we have a long way to go until ultimate equality is felt among genders and race. I think starting with the superhero genre—which is accessible to kids a lot of the times, maybe less so with The Boys but more so with films like Captain Marvel and Wonder Woman—it sends out a subliminal message that those characters who are really within their strengths are not just owned and taken up by men. So I think we do have some examples that are being portrayed in mainstream media. The Boys is cool because, like you said, it’s ironically opposed to the title, but there are really strong females in it. Especially in season two, they continue to be at the forefront of the strength that is displayed in our show. Look. I think that we still have a long way to go, and I think what’s going on in our world at the moment, in terms of what our leadership is and what’s kind of being exposed, for the most part, it’s really negative. But we can’t ignore that misogyny and racism are still present in our society. I hope shows like The Boys and movies like Wonder Woman and Captain Marvel, especially the success of these types of things, prove that people want to see women in strong roles.

Stormfront makes a comment during a press interview about the women’s uniforms and how they don’t have pockets. Starlight has probably the most revealing uniform of all the women, which was something she was forced into when joining The Seven. Do you think this is something that will change as time goes on?

I do. Season two is largely Starlight having to put on a façade for the sake of going undercover, and that involves playing the game and putting on a mask for Vought in order to appease them and essentially distract them from what is actually going on underneath. She has to put on that Vought Barbie persona and that aesthetic, but I think she recognizes—and hopefully the audience will recognize it too—that, if she’s going to achieve her goal of eradicating or lessening the misogyny in Vought, she is willing to play the game for the moment. But I do think we can all feel assured that she will come back to her true self in many ways, including her aesthetic self.

I went deep into the WWW archives and found a feature we did with you back in 2013! In that interview, you said you had gone through a lot of crazy phases in terms of your personal style and were still finding yourself. Are you still in an exploration phase?

I think, to a certain degree, I will always be in a little bit of an explorative phase, and I say that because I now wear things and have certain aspects of my style I thought I never would. I did that interview with you guys when I was, I think, 18, and my childhood and upbringing were still very much reflected in my style and my aesthetic. The more time I spend outside of my upbringing, the more I come into my own as an individual instead of feeling the influences of my parents. When you leave home, it takes a while, but eventually, you realize who you are outside of the influences of that home. I would say that growing up in New York City very much shaped the clothing I wear, and I do fall into the stereotype of always wearing black and gray. And in the summer, I’m often in white. I do wear color, but for the most part, I love those neutral, charcoal, and black tones. I also love a very functional look that I know I can go out and be comfortable in, which is very much a New York City component because you are walking all day and taking the train, and it’s a little bit more of a depleting lifestyle. But yeah, the explorative side, I think I will always have it. The really fun thing about fashion is that you change as a person, so therefore, your aesthetic changes because, often, it’s a reflection of who you are internally. And that’s why I think fashion is actually really important and goes beyond being superficial.