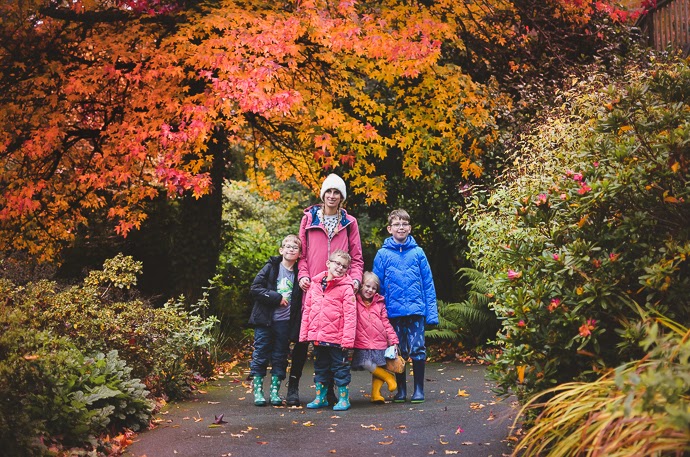 We have been to the Isle of Wight a few times with the children and always visited Blackgang Chine but this was our first visit to the sister park, Robin Hill and it was a huge hit with all of us. With a little bit of everything and a whole lot of space, this is a wonderful way to spend a day and even with rain nearly all day, we could access most of the attractions.  Sadly the slides and toboggan run which looked brilliant fun were shut, but the rest of the park was open, and the rain meant it wasn’t too busy!

If you do decide to visit on a wet day, then I would strongly advise waterproof trousers for the children as the park is full of activities that they can use their whole body for and my kids were keen to get stuck in straight away.

The first attraction we found was actually a 4d cinema simulator experience which the three boys loved and did twice (there are a few different versions so it is easy to revisit.  Due to Covid there were no 3d glasses but the seating was well cleaned and masks were compulsory for all ages.  Cora was too short to be allowed on but there is a playground next door if families need to split for this.

We walked further into the woodland next and found our favourite bit, Jungle Heights.  A mini obstacle course in the trees that feels safe and secure and that my middle two boys (aged 5 and 7) could have done over and over for most of the day given the chance.  As it was made mostly of netting, the rain didn’t affect it.  Nearby was a squirrel tower playzone which was a bit more adventurous. 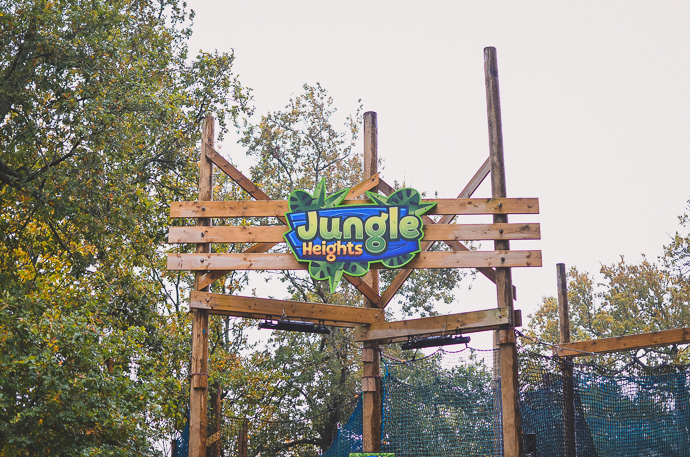 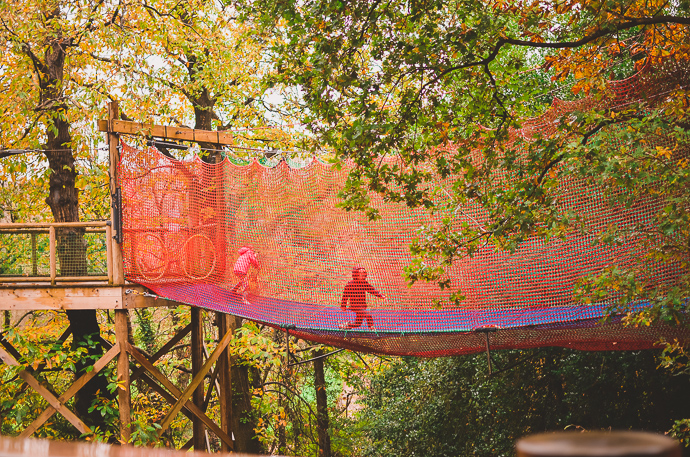 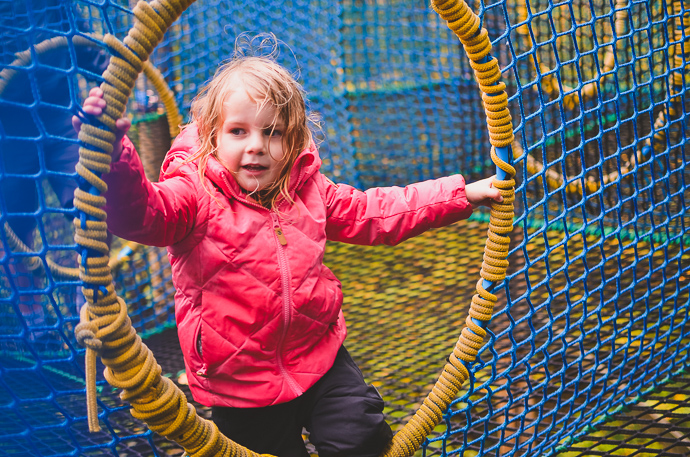 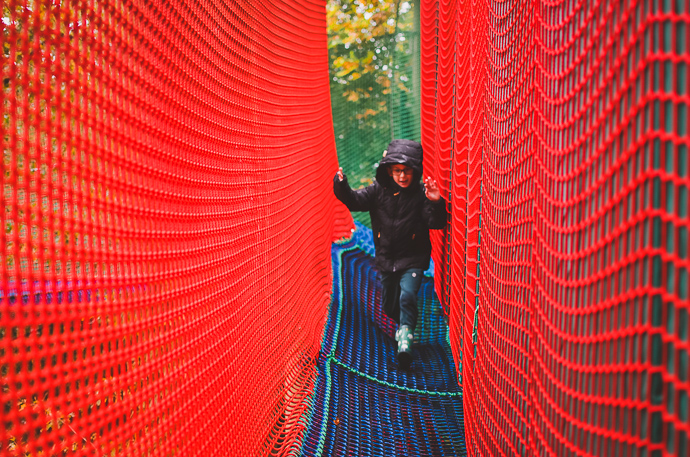 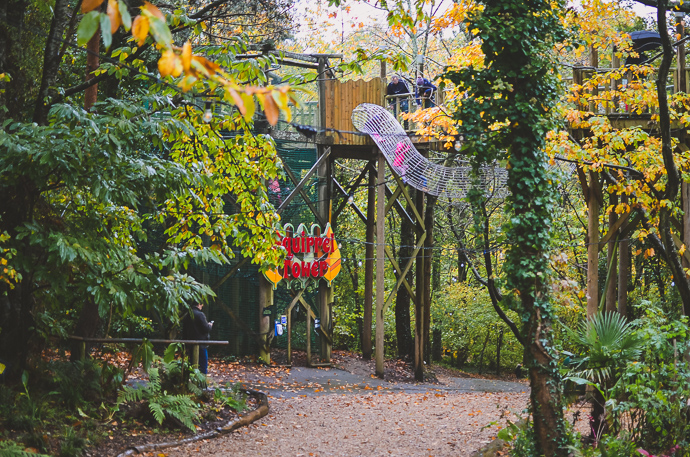 As we continued walking through the woodland we came across a little construction area with diggers to play on which the younger ones really enjoyed,  Over the half term, Robin Hill was running a series of ‘Autumn Nights’ events with a later closing time, light walks and live music and we had visited on one of these days, although we sadly missed the evening entertainment as we had arrived at the park at 10am and by 5pm we were all pretty tired!  It did mean that there were lights hanging in the trees though and as it was a dark day, they were already on, making the woodland feel even more magical. 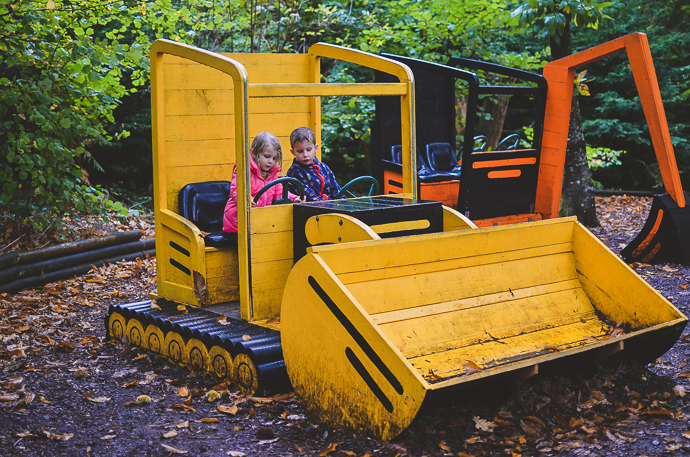 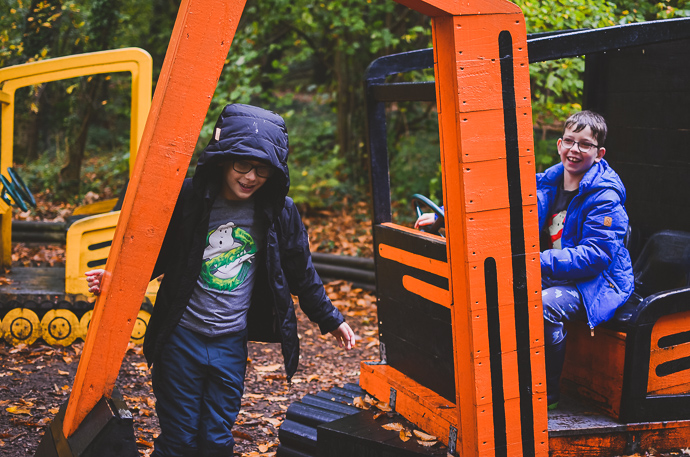 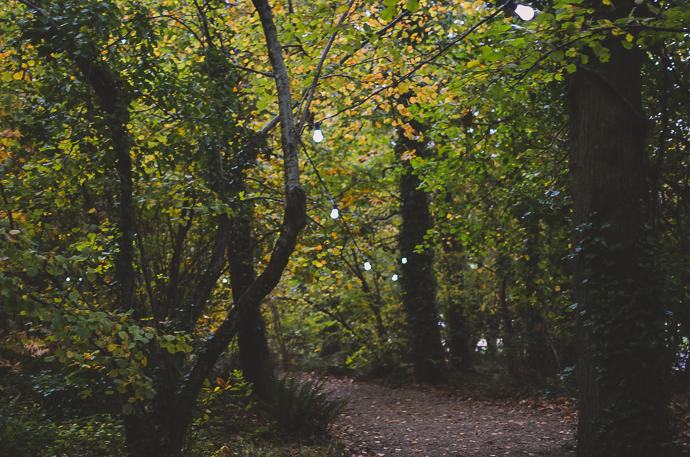 Whichever direction we went in, there was so much to discover.  We wanted to stop for food and could see a few places selling lunch in the park but none had a seating area in use.  There was a main cafe near the front entrance though which was shut for food but available for indoor seating so we grabbed a seat in there.  Once we were refuelled, we went in search of more ways to get muddy and found a play area near the pizza place which had a lake you could cross on bouncy bridges.  The kids loved the assualt course play area and running and jumping on the bridges. 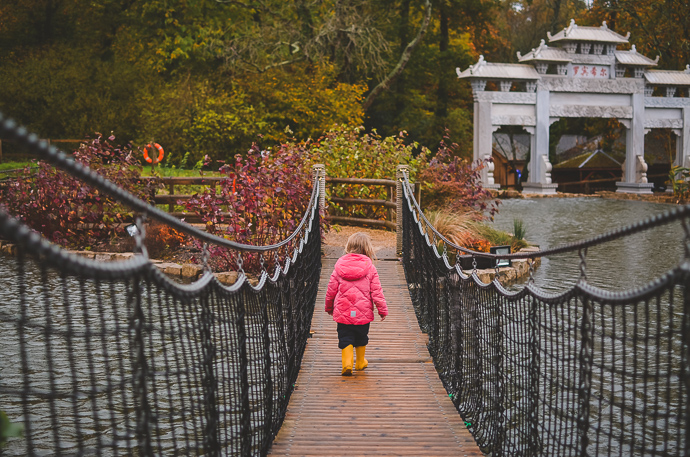 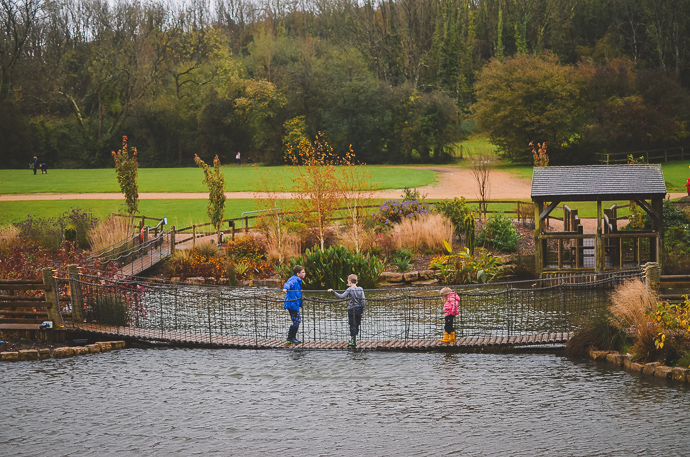 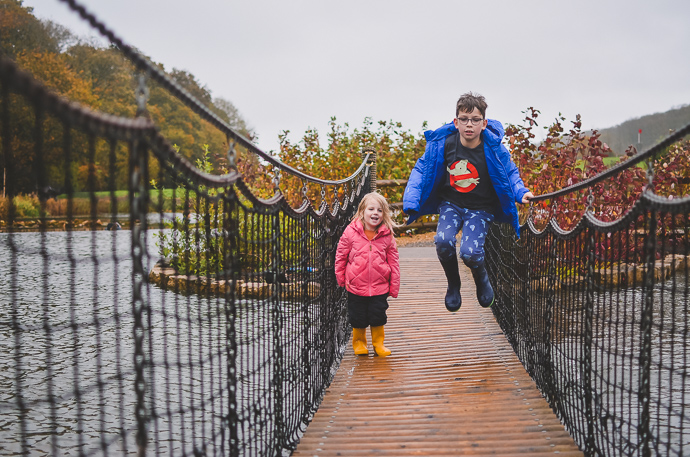 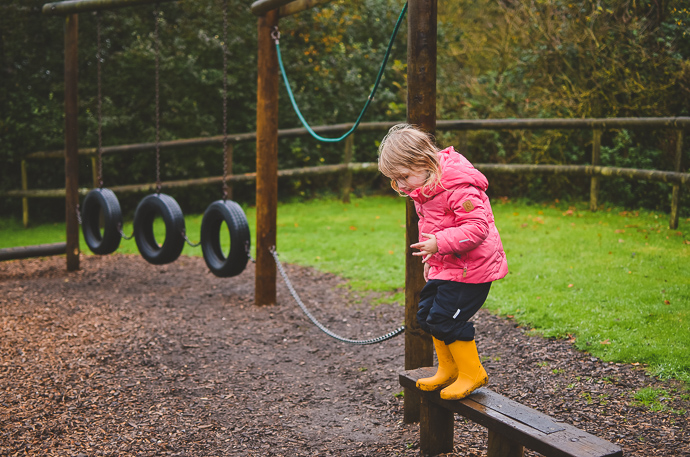 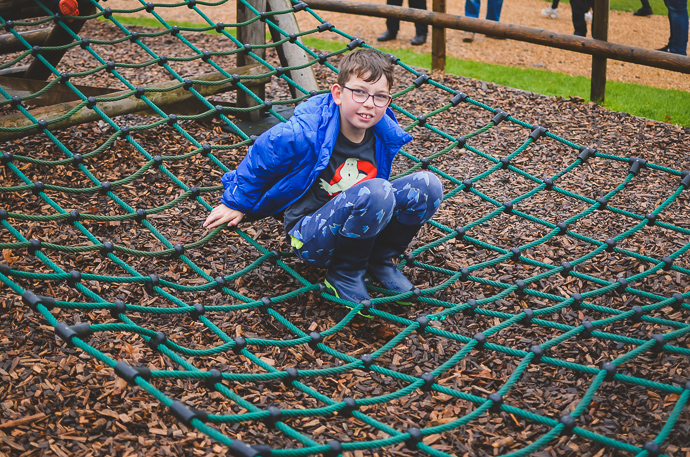 There are two rides in the park, a swinging boat that only one child wanted to try out, and the ‘Cows railway’ which I think they all went on about ten times.  Designed more for younger children but with humour for adults, this mini train does a short track and passes many novelty cows.  The kids all wanted a go in the drivers carriage and it was a calm moment in the day. As the park was quiet, they could race round whilst the seats were being cleaned between each person and get back in the queue. 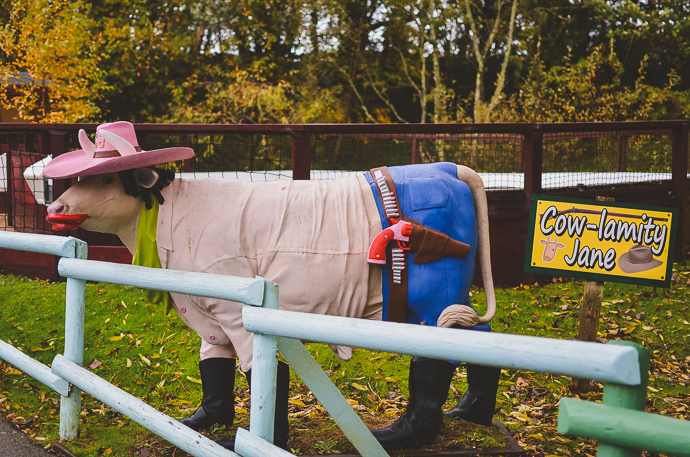 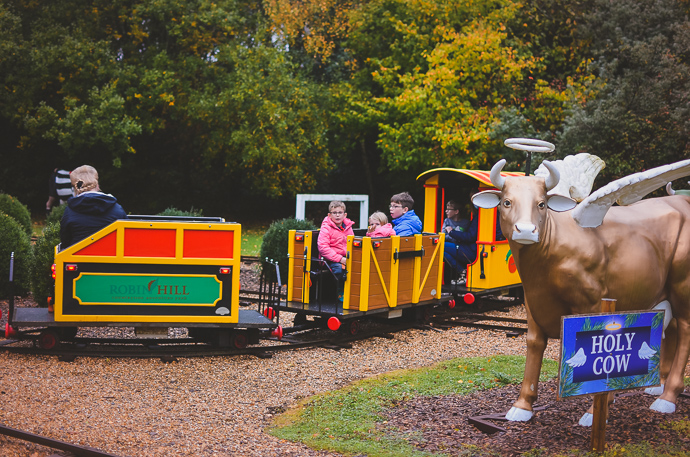 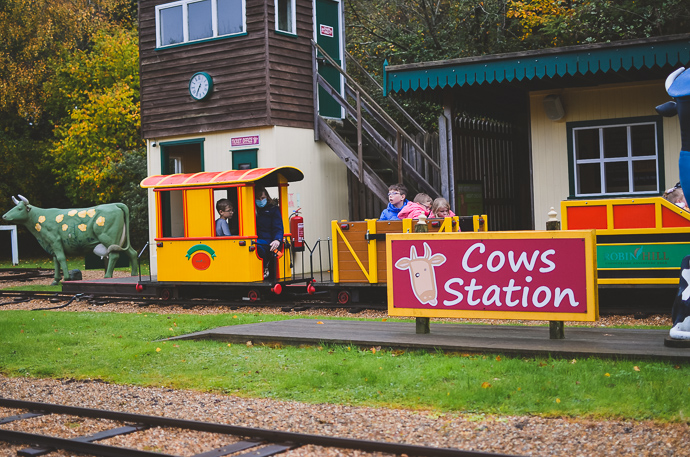 We found a tiny village full of little houses and shops they could play in, similar in a way to cowboy town at Blackgang Chine.  This is somewhere they can let their imagination run wild and there was plenty of space to run around (as there was everywhere in the park) 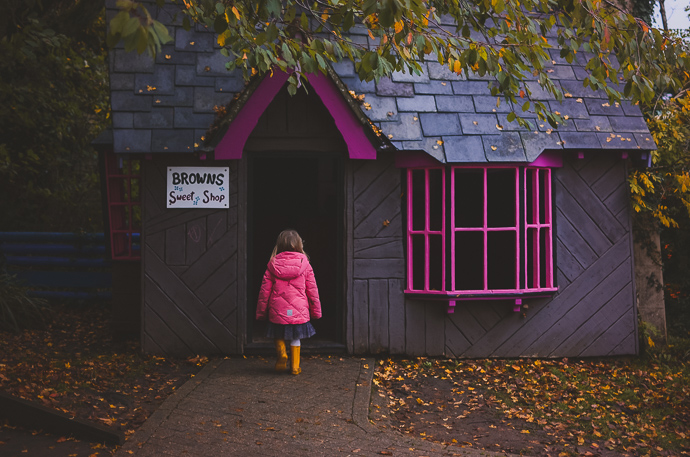 As our energy was fading, we searched out a coffee hut and found a beautiful park surrounded by animal statues. The playground was extensive and fun and all around were things to look at, as well as a lake with real fish that came over to us, clearly looking for food.  We could see them setting up a music area here ready for the evening entertainment and there was a big shelter with hay bales in preparation.  I would love to revisit and stay for the evening Autumn Nights session. The playground was covered in colourful lights too so the children would be entertained into the evening. 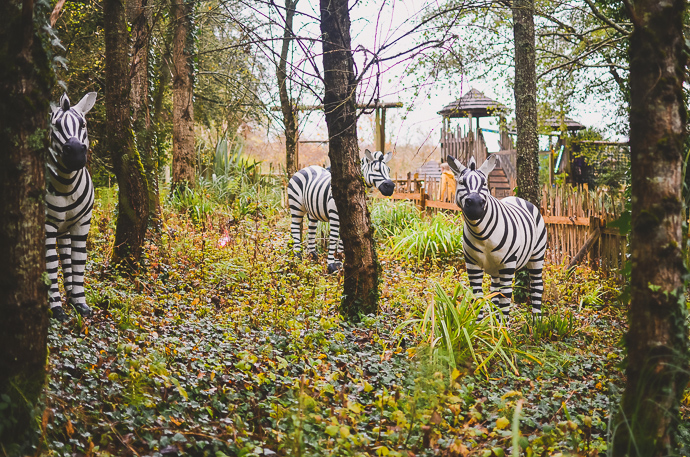 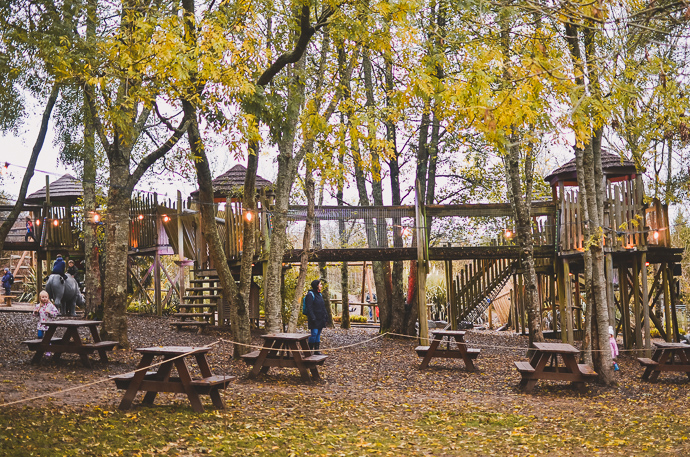 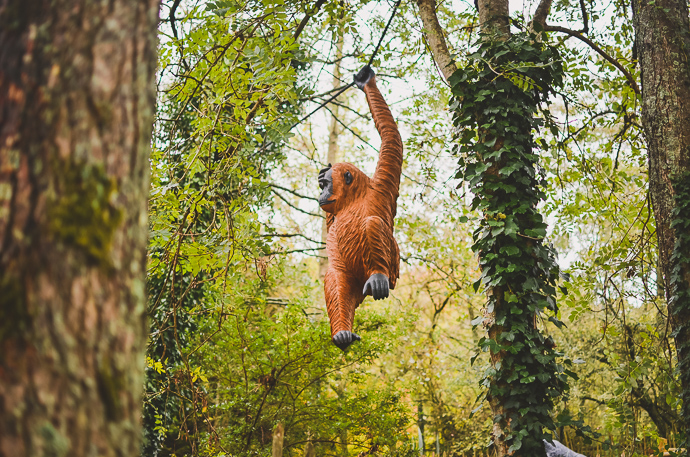 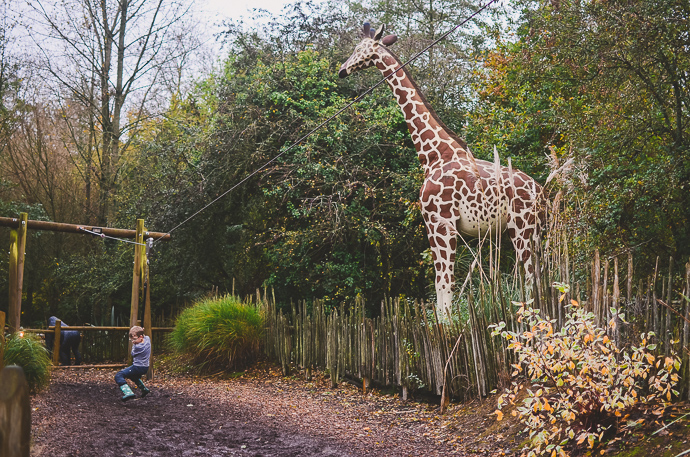 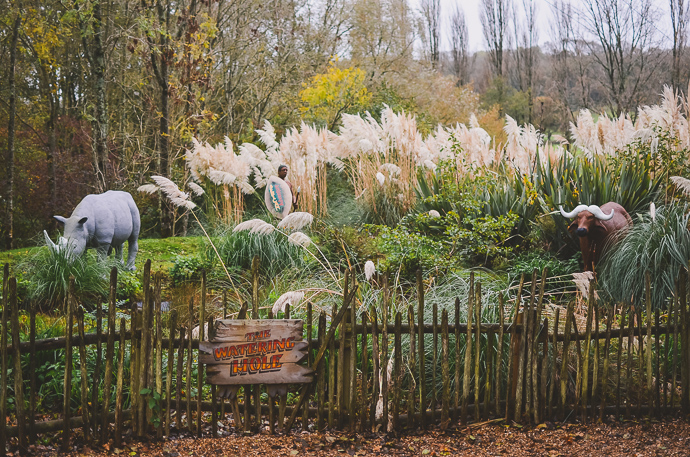 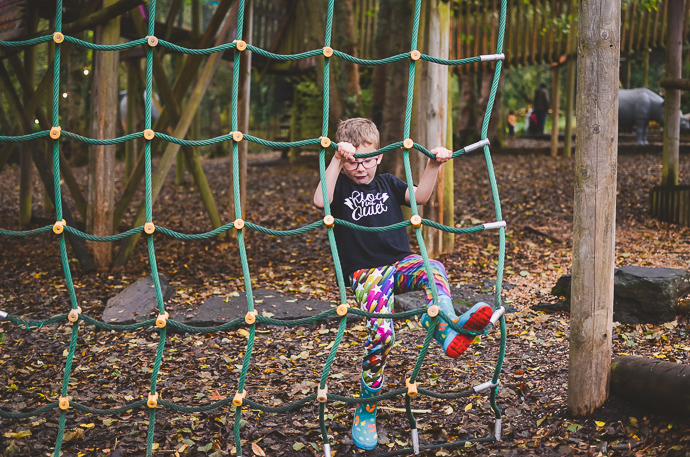 We had a fantastic visit to Robin Hill and the children all picked it as their best day out.  I would say the park is aimed mostly at the 3-8 age group so it was perfect for us.  The space was ideal for children that need to run wild and the nature of the facilities made it easy to stay Covid compliant as it was nearly all outside.  There was other things to explore that I haven’t mentioned but our favourite parts were definitely exploring the variety of outdoor play zones where they could wear themselves out.  We chose a joint entry ticket for Blackgang Chine and Robin Hill which was roughly £35 per person (under 4s are free) and with each entry you can return free of charge for 7 days, something we would definitely take advantage of on a longer trip!  If you are visiting the Isle Of Wight with toddlers or primary aged children then I would recommend Robin Hill park as a fun day out. 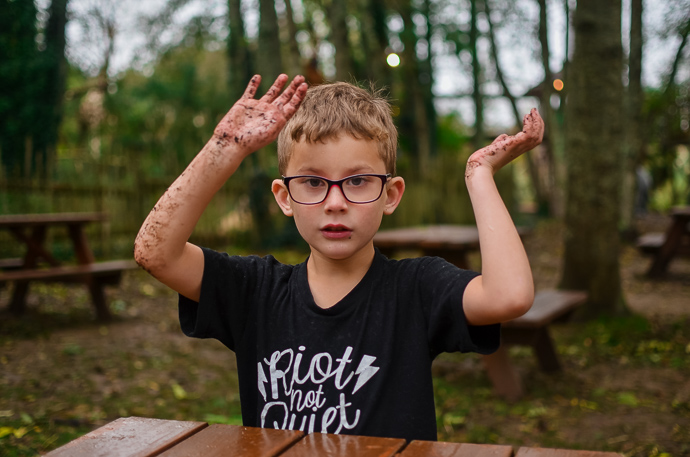 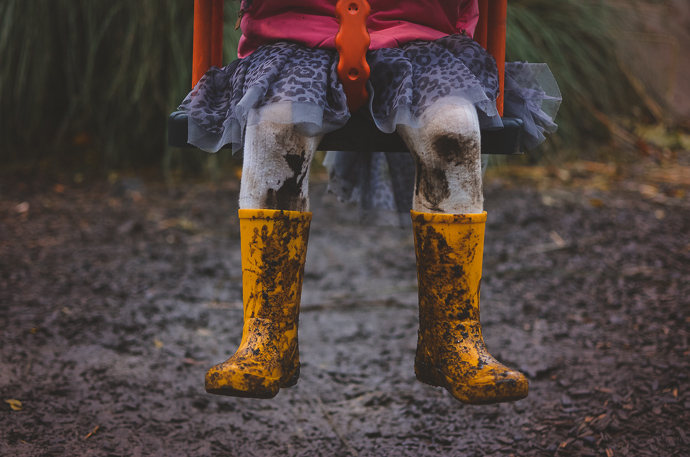 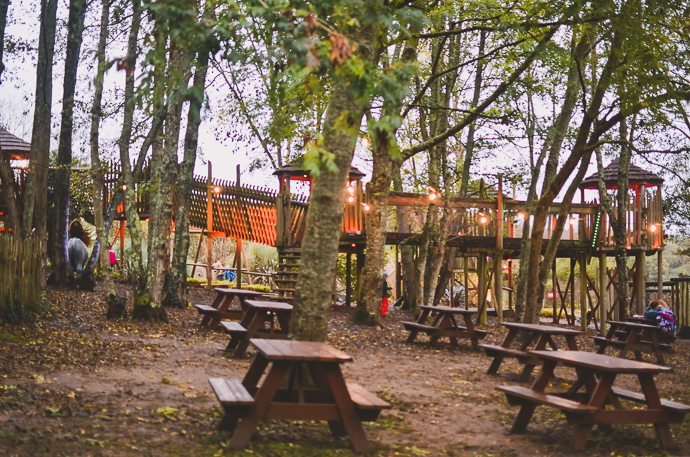 How This Size-Inclusive Brand Caught the Eye of Stacey Abrams