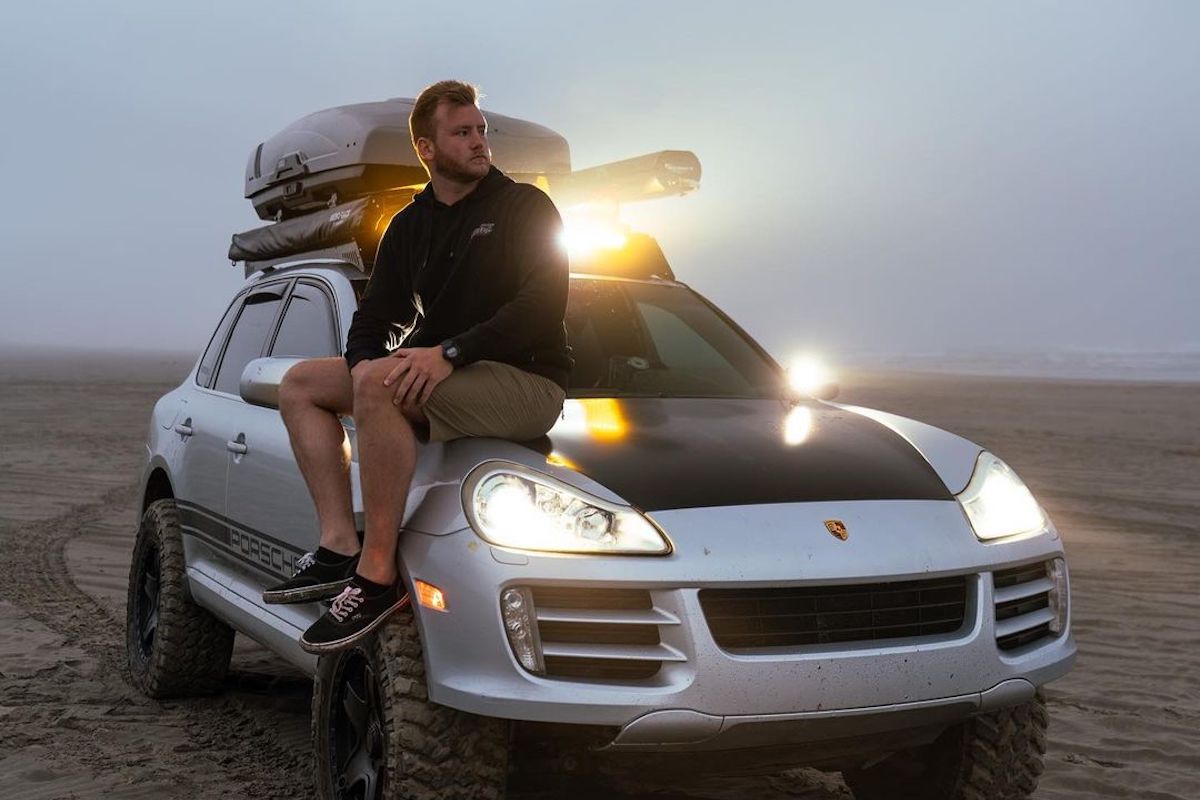 With international travel mostly off the cards for everyone this year, thanks to The Spicy Cough, adventurous types around the world have turned to road trips and camping to get their kicks.

This in turn has seen a number of vehicles see a huge spike in popularity, on top of the already rather heated car market. Of course, if you want to live that #vanlife you need a van, so Toyota HiAces and Volkswagen Transporters are hot property right now – but the real hot ticket items have been 4x4s like the Suzuki Jimny, Land Rover Defender and Australia’s favourite, the Land Cruiser.

Naturally, with fun road trip cars thin on the ground right now, adventurous types have been forced to look elsewhere. But one American man has turned heads by choosing a rather unlikely vehicle to turn into an off-road monster – indeed, to turn into his full-time home on the road: a 2008 Porsche Cayenne S.

Harrison Schoen, a US Navy veteran and self-described “regular guy” has turned many heads by choosing the luxurious German SUV as the basis for his off-road build.

“Since getting out of the Navy shortly before COVID, I’ve felt tied down and trapped in regular routine,” he explains on one of his videos.

“Bills coming in, going out and so many unnecessary things occupying my time. I’ve decided to leave those behind and live completely from my Cayenne. An unlikely pick for this type of thing, but it’s what made the most sense for me.”

Few Cayennes go anywhere other than strip malls or the school run, but the Porsche isn’t as outrageous of a choice for an off-road build as one may think. All Cayennes have permanent four-wheel drive and torque to spare, as well as a wide variety of meaty engine options.

Indeed, Porsche even made a super-capable limited edition variant called the Cayenne S Transsyberia, designed explicitly to compete in the eponymous (and gruelling) Transsyberia rally in Russia.

Schoen bought the vehicle for US$9,000 with 125,000 miles on the clock, although he’s spent several thousand dollars modifying the car, with things like a 4” lift; tougher upper and lower control arms; bigger wheels and tires, and amenities such as a portable shower and awning.

He points out, however, that choosing a more “practical” vehicle for one’s 4×4 build – like a Jeep Wrangler or Toyota 4Runner – would have a much higher cost of entry, as those cars are more expensive to buy second-hand in the US.

Maintenance has also been reasonably hassle-free. DMARGE spoke with Schoen, who explains that other than the water pump and alternator being tricky to replace, the car’s been no less reliable (or expensive) to maintain than other alternatives:

“Parts aren’t really that much more expensive. The biggest cost would be if you took it to Porsche or an independent Porsche outfit, and they’d have a big labour cost.”

The Cayenne is widely considered one of the least reliable Porsches ever made (although considering Porsche’s track record of making superbly reliable cars, that’s an incredibly relative label).

Schoen’s 4×4 build, however, is a one-car rebuttal to anyone who says the Cayenne is unreliable – or that luxury cars can’t hack it as genuine off-roaders.

These Popular Australian Suburbs Are Increasing In Value By $50,000 A Month

5 Unique Things You Should Buy In Israel

The Complete Guide To Linen Suits For Men

ABOUT US
A fashion website curating fashion and lifestyle from the high-end to the budget-friendly. If you're looking for style inspiration then Sometrical best fashion website to follow now.
Contact us: [email protected]
FOLLOW US
© Copyright 2020 SOMETRICAL - All Rights Reserved | Developed by iTHawks
MORE STORIES
Beauty