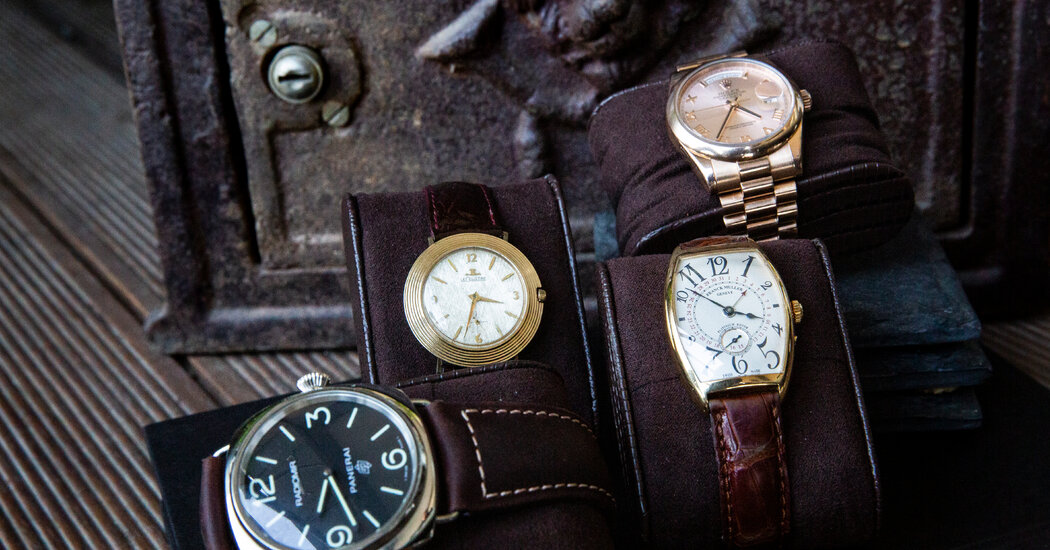 As co-founder and chief investment officer of the online stock trading platform Zerodha, one of India’s largest retail brokers, Nikhil Kamath is an expert in investing. He also is a budding watch collector. Just don’t expect those worlds to overlap.

The 34-year-old self-made billionaire has never sold a wristwatch from his collection and says he doesn’t intend to, even though he acknowledges that some of his timepieces — such as a 2015 Rolex Submariner nicknamed the Hulk for its green dial and green ceramic bezel — have increased in value since he purchased them.

“It’s a way of consoling your own vanity to think of watches as investments,” Mr. Kamath said on a recent video call from his home in Bangalore. “I can tell myself that and feel less vain about buying them.”

While his collection is modest in size — he owns a dozen timepieces — it is extremely eclectic, ranging from a 1920 wristwatch by LeCoultre to a contemporary Octa Lune model by F.P. Journe.

His collecting ethos does not center on a specific brand, aesthetic or functionality; instead, Mr. Kamath, who is just one example of the growing numbers of wealthy collectors in India fueling the luxury watch market there, looks for watches that resonate with his values or remind him of certain periods in his life. For example, in 2018 he bought a 1990 rose gold Rolex Day-Date model on a President bracelet — “a brash, loud, chunky, golden watch,” he said — because it reminded him of a bygone era in trading.

“If you watch a movie like ‘The Wolf of Wall Street,’ everyone’s wearing a watch like that,” Mr. Kamath said. “It’s when personalities ruled the world of trading and investing versus today, when it’s more mathematics and algorithms.”

Mr. Kamath has reason to be charmed by Wall Street’s high-flying good old days. In 2019, he and his older brother, Nithin, Zerodha’s co-founder and chief executive, founded True Beacon, a hedge fund that caters to those with an ultrahigh net worth.

Although he clearly belongs to the world of high finance now, Mr. Kamath did not grow up surrounded by luxury watches, or among the captains of industry who might have worn them. Born in northern India and given a middle-class upbringing, he spent the first decade of his life on the move.

His father, a bank manager, was transferred to a new city every three years. When Mr. Kamath was 9 years old and Nithin was 16, the family settled in Bangalore.

Five years later, Mr. Kamath left school to play chess full-time — though he admits his trajectory in the competitive chess arena was nothing like that of Beth Harmon, the fictional star of Netflix’s “The Queen’s Gambit.”

Instead, at 17, Mr. Kamath parlayed his understanding of game theory into a career trading on the financial markets. A few years later, he bought his first important watch, a Rolex Milgauss.

“I always had a fascination for watches but could never afford them,” Mr. Kamath said. “The Milgauss was, I think, one of the cheapest Rolexes you could buy, but outside of that, I liked the green tinge on it.”

Slowly he added to his collection, acquiring a Franck Muller Cintrée Curvex model from 1998, which he appreciates for its boundary-breaking shaped case, and a 2017 IWC Big Pilot watch — originally developed during World War II for the German air force — that represents his fascination with war history. Also, a 2018 Blancpain Villeret dress watch, named for the Swiss mountain municipality where Blancpain was founded in 1735, which he considers a symbol of the mechanical watch industry’s centuries-old heritage.

“I like how these companies have survived for many decades and have continued to remain relevant,” he said.

Mr. Kamath is especially charmed by the independent watchmaker François-Paul Journe, not only for the good looks of his creations (“It is hard not to be taken in by the remarkable craftsmanship and beauty” of the Octa Lune watch, Mr. Kamath said), but also for the idiosyncratic choices that Mr. Journe has made in a tradition-bound industry.

“From producing almost all of its movements in 18-karat rose gold to its unique compositional character and typography, F.P. Journe is a constant reminder to me that there is a path to be forged even if it’s unseen or never been done before,” Mr. Kamath said.

There’s only one wrinkle in his love for the brand: “They’re a little bit cocky,” Mr. Kamath said. “When you walk into a boutique and ask for a watch, they don’t give it to you, which makes you want them even more. I try to pick them up when I’m traveling.”

Over the past year, the pandemic has largely curtailed Mr. Kamath’s travel, so he has indulged his hobby by reading the popular watch website Hodinkee (“I think everyone in the watch world looks at Hodinkee”) and studying trends on the resale site Chrono24. He said he did not think of watches as investment vehicles, but admitted that professional habits die hard.

“I spent a lot more time looking at watches through the lockdown” last spring, he said. “I was watching the market closely to see if prices would go down, but I don’t think they ever did — maybe 10 percent here and there, but there was no serious correction, even at peak pandemic.”

Mr. Kamath’s latest purchase is a DBS model by the independent Swiss watchmaker De Bethune, whose experimental-looking timepieces can cost $200,000 or more.

“The thing with a lot of these watches, the De Bethune or the F.P. Journe, is that people don’t really recognize them to be valuable watches,” he said. “So even to a mugger, I don’t think this is the first thing they’re going to set their sights on.”